Unreliable Memories from the Blogmaster

Send me SOMETHING!!! Thus spake the editor in the latest Newsletter and even resorted to telling jokes to fill the pages.

Well, the third exclamation mark got me started to jot down some of my memories of my employment with the ANZ Bank which, despite its shortness, had been a hugely important milestone in my life and I will always be grateful to the late Mr Robert Reid, the then manager of the ANZ Bank in Canberra, who hired me as a youngster, fresh off the boat from Germany, and gave me the chance of a new start in a new country. 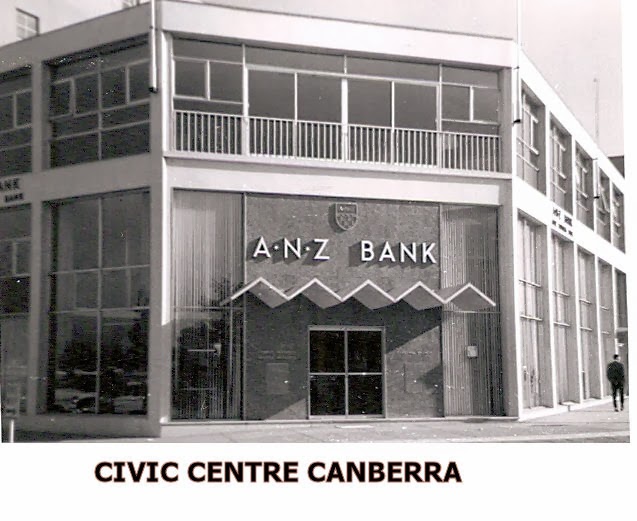 And, of course, the Bank's social life and the team spirit, together with living in a boarding-house full of other "Bank Johnnies", left me with many memories which I indulged in on my Barton House webpage.

Working for the ANZ Bank allowed me to not only learn good, almost expletive-free English and mix with people a cut above the rest but it also introduced me to Australian commercial practices which would stand me in good stead as I worked my way through a correspondence course in accountancy with the then Hemingway Robertson Institute.

"Once you withdraw, you lose all your interest!" That's what my immediate boss, John Burke, jokingly used to tell me! He was the head-ledgerkeeper at the ANZ Bank in Canberra Civic during my first two years as ledgerkeeper from 1965 to 1967. He was again my boss as accountant of the Kingston A.C.T. branch where I worked as a teller for another nine months or so after I had come back from South Africa. 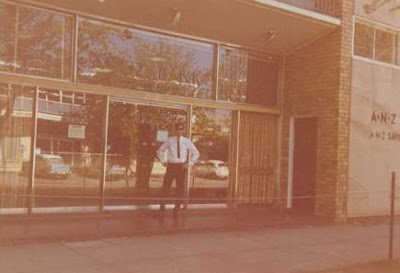 Yours truly outside the ANZ Bank Kingston A.C.T. in 1969

Those were the days before computers, electronic calculators, or even electric adding machines! Everything was done manually and took many hours, like when it was 'all hands on deck' twice a year to 'do the decimals', i.e. calculating the interest on savings accounts. And you needed a strong pair of hands to shake a sorting tray full of coins. Rolling those coins into tightly-wrapped tubes also took some learning. 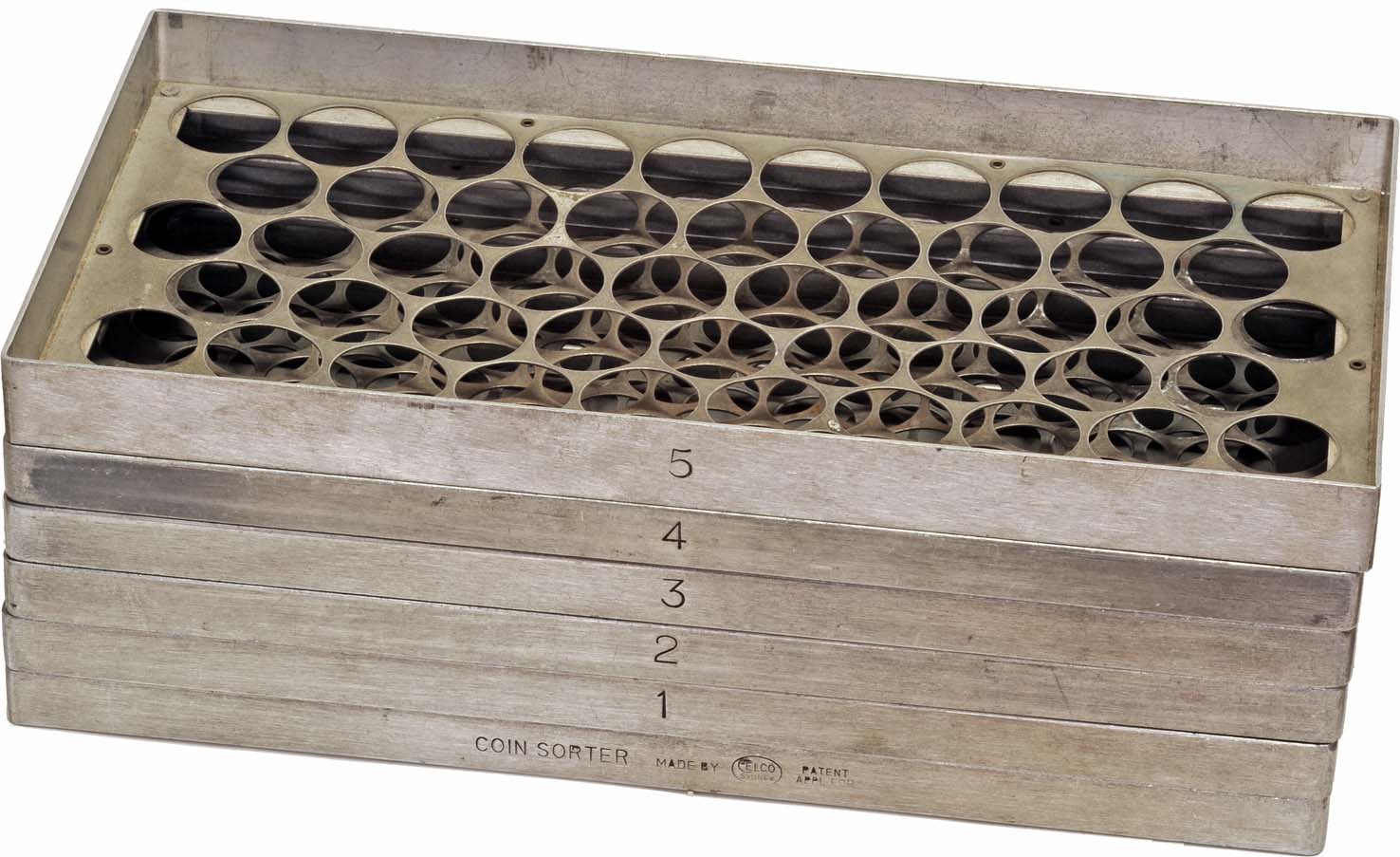 And what about pistol practice? Not that we ever fired a shot in anger! That small pistol in the teller's drawer and the red trip lever on the floor that would set off the alarm were our only defense against a hold-up that never came.

There were some machines, like that huge beast of a 'Proof Machine' which was the size of a small room on which all incoming cheques were 'batched' by the respective bank on which they were drawn. And in those days there were many more banks than there are today: who still remembers the Rural Bank of New South Wales, the English, Scottish & Australian Bank, the Commercial Banking Company of Sydney, the Commercial Bank of Australia, or the Bank of Adelaide? 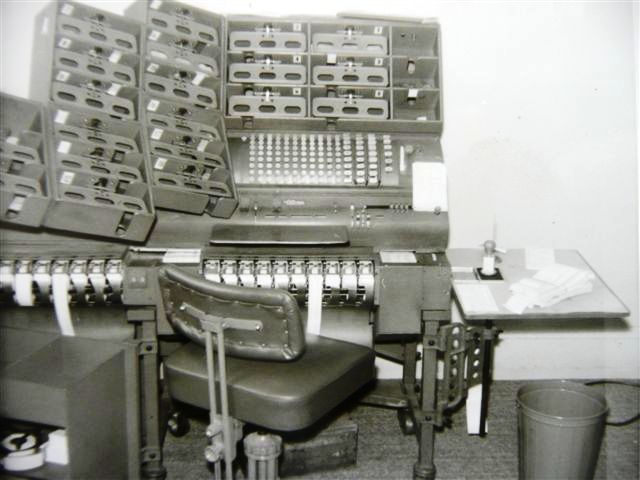 Here's proof of how big a Proof Machine was

Once a day one of us juniors would be the Exchange Clerk and trot off to the Reserve Bank on Canberra's London Circuit to exchange cheques with the other banks. It was a much sought-after job as some of the exchange clerks from the other banks were of the female variety which gave us blokes a chance to chat them up ☺

For us ledgerkeepers - Kevin Sloan, John Julian, Jeff Bowdie, and yours truly - the race was on every morning to extract as quickly as possible our customers' overdraft balances and report them on blue O/D Cards to the Assistant Manager, Mr Bradford, who would then decide which to pass and which to do the dirty deed on. Back in those days a dishonoured cheque was a disgrace - well, to some; others were daring enough to attempt to 'fly a kite' - and a customer's cheque was 'bounced' for all sorts of other reasons first - Endorsement Required; Signature Unlike Specimen Held; Amounts in Words and Figures Differ; Post-dated - before his lack of funds was disclosed with a gentle "Present Again" or the more abrupt and final "Refer to Drawer". 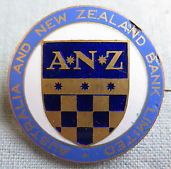 Female bank staff were demurely dressed in dark-blue smocks with detachable collars and an ANZ brooch fastened to the lapel. The absence of either resulted in a severe reprimand from the manager. As did swearing: Kay Atkinson once exclaimed, "Strewth!" Within minutes the phone rang and the manager wanted to know who had uttered such profanity.

Back then banks still bothered with small-time banking: we regularly visited schools and encouraged kids to deposit their play money into savings accounts with us. And we offered a variety of Special Purpose savings accounts: for holidays, for education, and, of course, for the eventual home purchase. No bank in those days gave out home loans to customers who had not been diligent savers over several years!

The ANZ Bank also encouraged its customers to save for Christmas with their Christmas Club coupon book which held 50 coupons of either $1, $2, $5 or $10. A customer could walk into any branch, deposit the equivalent of one or more coupons, and then wait until early December before he was sent his final balance, plus interest, in a cheque.

Some customers couldn't wait that long. They were given the third degree by the manager who demanded that they put their reason for an early withdrawal in writing. Once reluctantly approved, they were given back their money but without any interest - remember John Burke's "once you withdraw, you lose all your interest"? ☺

Speaking of third degree, woe betide you if, as a teller, you were short of money at the end of the day. All that grovelling and letter-writing to the State Manager who eventually, after you had started paying off the shortage from your meagre salary of forty-quid-a-fortnight or whatever, graciously forgave you the rest.

And I will always remember that small cheque I had sent to the Bankers' Association to pay my union dues. They had taken so long to cash it that I'd totally forgotten about it. When it finally came in, the balance in my account was less than the stamp duty on the cheque. I think turning up drunk for work or being caught out in some osculating activities with a ledger girl in the bank's strongroom would have been more excusable than uttering a worthless cheque. More grovelling and more letter-writing to avoid being given the sack! (By the way, having an account with another bank was also a sackable offense!)

Do banks these days still have an Opinion Clerk? I was one for a while, which was probably the only time when the ANZ Bank gave out opinions in a heavy German accent. My favourite one was 'Possessed of assets' (which in the vernacular meant "filthy rich") which I knew I would never achieve on my paltry bank salary (my penurious situation was best captured by the bank opinion 'Financial position unknown' aka "flat broke"), so I left the bank again at the end of 1969 to seek my fortunes elsewhere - see here. 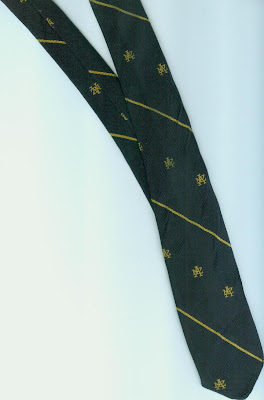 The tie that binds

But I still have my old Bank tie and many happy memories and, yes, I am now 'Possessed of assets' but rapidly running out of time to spend them all. Unless, of course, it is true what they say: that old bankers never die; they just want to be a loan!

Authorised for publication by Alex Morgan
(in other words, direct all libel suits to him ☺)